April 17, 2019
This will be my third attempt at an extended fast (longer than 2 days) in hopes of boosting the immune system, lowering inflammation and solving chronic pain and digestive issues. Summary. Day 1: Monday, April 15th.  Pretty standard, have been doing a lot of OMAD recently and this day seems fine. Day 2:  Did a two-day fast recently, but despite that there was a significant stomach problem.  It could be the coffee, so perhaps I will skip that on day 3.  Bloating and pain.    Took measurements. Glucose:  92 mg/dL Ketones: 1.3 mmol/L Calculated GKI:  3.9 This is odd, the numbers are not reflective of what one would expect after 48 hours.   Glucose reading was from the morning though (could make a difference).  Just don't feel like stabbing myself in the finger more than I have to. REM sleep: 1hr 26min Deep sleep: 1hr 12min This was surprising as it felt a lot more restless.  Yet those numbers are quite good relative to my usual. Day 3:  Restless sleep, however the s
6 comments
Read more

September 07, 2018
Took some time off from posting, five years constitutes "time off" right?  Career flourished a bit, went through some relationships.  My life changed, but America largely has not.  Somewhat amusing to read my old posts and pick up that tinge of panic and concern over the big liberal scare that was Obama.  Turns out, a lot of the fear emanates from ourselves and distorts our reality.  Much of what I said never really panned out or if it did, the gravity of the situation ended up so differently as to nullify almost all predictions. Predictions politics and economics as it turns out, is quite difficult.  We now live in the age of Trump and there is nothing to celebrate.  However the gnashing of teeth from the opposition is as loud and vociferous as was our own between 2008 and 2016.   Much of the predictions and concerns remain hyperbolic, as they tend to be in American politics.  Sure, there remains a litany of problems in today's administration and their brand of pol
6 comments
Read more

The curious case of Syria. 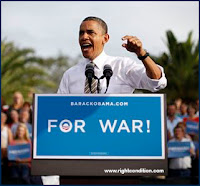 Much has been said about the soon-to-be inevitable strike against Syria, but I do want to add a few rambling thoughts.   Clearly the situation has been bothersome enough for me to emerge from a long slumber, hopefully some readership still exists! While the fusion of two parties into one giant monolithic warfare-welfare state is now a foregone conclusion, several interesting arguments have come up that I would love to scribble about.   Argument #1:  Obama does not need to seek Congressional authorization, but now that he has, he is a great president.  First of all, just because there is precedent does not make the precedent noble.  Bush got authorization for Iraq and look what happened.  An open-ended conflict that dragged on longer than world war 2, the result of which is unclear at best.  Just last weekend, explosions rocked Baghdad as a result of sectarian violence.   Whether we bomb them, invade them or import our brand of democracy - the cultural differences of an a
6 comments
Read more

Dr. Benjamin Carson's speech causing quite a stir from the Left and the Right.

Ever heard of Dr. Benjamin Carson?  If not, you will, although the calls for this man to run for political office are a bit premature.   The big buzz behind this man is a speech he gave at the National Prayer Breakfast and what makes this particular speech so "controversial" is that he is appearing to lecture President Obama who is sitting right next to him.  Supposedly the content of the speech was too political for the venue. The Left is absolutely frazzled by this and called the speech shocking.    The Right believes they found their next presidential candidate. As always, both are wrong.   Firstly, there is nothing shocking about anything this man said.  Supposedly it is offensive to the President, but Carson does not once call out any particular or specific policy.  He simply talked about the deficit, education, tax policy and health care.  He provided some suggestions and genuinely hoped that the two political sides in America can come together and solve t
2 comments
Read more

January 19, 2013
After we watched in amusement Governor Cuomo shove a hasty gun restriction bill down the throats of NY citizens many wondered, is he doing this for political gain or is this a part of a broader coalition of gun legislation?   Looks like we have our answer, Massachusetts did not hesitate to follow suit and proposed extremely similar restrictions : It reduces access to high-powered rounds of ammunition. It better tracks weapon sales by (1) requiring dealers at organized gun shows to connect to the Massachusetts Instant Record Check System (MIRCS) when conducting a sale of a firearm; and (2) requiring private sales of firearms to occur at the business of a licensed dealer so that the sale can be tracked electronically. It limits gun buyers to one firearm purchase per month and prevents the furnishing of a machine gun to any person under 21 years of age.  Finally, this bill would allow a rebuttable presumption that an individual charged with a felony involving firearms and ph
3 comments
Read more

Fiscal cliff, perhaps it is best to go over?

December 28, 2012
What are your thoughts on the fiscal cliff?  This has been the primary topic of conversation in the media and it focuses on whether or not the Republicans or Democrats can come together and forge a deal. We should be wary of compromises, the end result is generally beneficial for the deal makers and disappointing for the rest of us.  As George Carlin once said: "Bipartisan usually means that a larger-than-usual deception is being carried out." USNews has a very broad summary of what happens if our esteemed politicians fail to reach a grand compromise : "— Some 2 million jobless Americans may lose their federal unemployment aid. Obama wants to continue the benefits extension as part of the deal; Republicans say it's too costly. — Social Security recipients might see their checks grow more slowly. As part of a possible deal, Obama and Republican leaders want to change the way cost-of-living adjustments are calculated, which would mean smaller checks over the year
2 comments
Read more

The credit expansion boom of 2009 will eventually go down as yet another period of credit expansion promoted by the Fed that will have lead to another predictable bust.   Today, it will be interesting to examine how the various levels of production are behaving under years and years of artificial interest rate suppression.  It will also be helpful to look at charts and graphs examining the business cycle theory and the impact of time preference as taught by Mises. For starters, those new to the concept - a very brief paraphrasing of the general idea. Under a healthy functioning market people's consumer patterns impact their savings.  More consumption equals less saving and less consumption more saving.  In order to progress the society must save such that it can make investments in machinery, equipment, technology, etc if it hopes to increase the capacity of production.   Sure ,you can harvest 10 coconuts a day, consume them by night and repeat the process.  You can also defe
668 comments
Read more
More posts